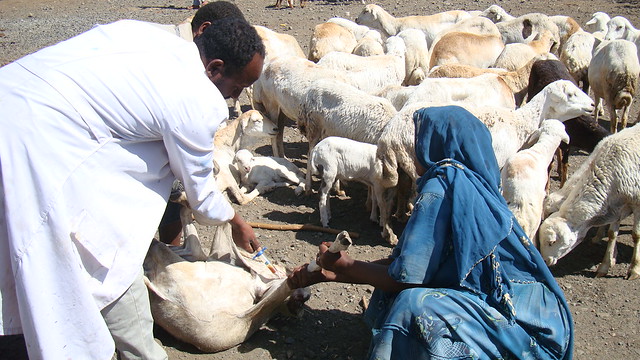 With more than 55 million sheep and goats, Ethiopia is endowed with the largest small ruminant population in Africa.  They contribute substantially to the livelihoods of smallholders as a source of income, food, and raw materials among others. Yet, the sector’s productivity remains low mainly due to lack of improved animal health services.

The livestock health flagship of the CGIAR Research Program (CRP) on Livestock is supporting the transformation of small ruminant value chain in Ethiopia. To this end, an integrated approach to tackle key livestock health-related challenges has been devised.

The animal health interventions are implemented by the Small Ruminant Value Chain Transformation in Ethiopia (SmaRT) project in collaboration with the International Center for Agricultural Research in the Dry Areas (ICARDA) and through the CRP Livestock with the support of the Swedish University of Agricultural Sciences (SLU).

Over the last two years, participatory epidemiology and gender studies combined with serological surveys were conducted to identify the livestock disease constraints that smallholders in the country face. Respiratory diseases, internal parasites, reproductive problems and coenuruses were among the disease challenges identified.

The study also confirmed that women play a major role in small ruminant production. They are involved in feeding and watering livestock, animal health management, cleaning and assisting during delivery.

To address these challenges the following animal health interventions have been developed:

In addition, tailored training workshops were organized for 639 (31% female) smallholders, enumerators and development agents in selected project sites in the Amhara, Tigray, Oromia and the Southern Nations and Nationalities region. The training sessions covered major animal health constraints and their effects, and how the planned interventions will help to solve the problems.

Men and women champion farmers were selected from the trainees in each project site and they will assist the project in collecting data from the community.

The early indications of the impact of the trainings include:

Over the next months,  the intervention continues and the project team will then evaluate impact at farm and population level. In addition, based on experiences so far, a series of training modules for livestock farmers and animal health service providers is being developed which can then be rolled out at scale.

The International Fund for Agricultural Development (IFAD) funds the SmaRT project through the CGIAR Research Program on Livestock.

This site uses Akismet to reduce spam. Learn how your comment data is processed.

In addition to organizations recognized for specific projects and outputs, we thank all donors which globally supported the work of the program and its partners through their contributions to the CGIAR system

The CGIAR Research Program on Livestock aims to create a well-nourished, equitable and environmentally healthy world through livestock research for development.

It provides research-based solutions to help smallholder farmers, pastoralists and agro-pastoralists transition to sustainable, resilient livelihoods and to productive enterprises that will help feed future generations, making meat, milk and eggs more available and affordable across the developing world.

This program continues the work of the CGIAR Research Program on Livestock and Fish that ran from 2012 to 2016.